New Life for an Old Favorite. A Capri 25 Gets Her Groove on Again! 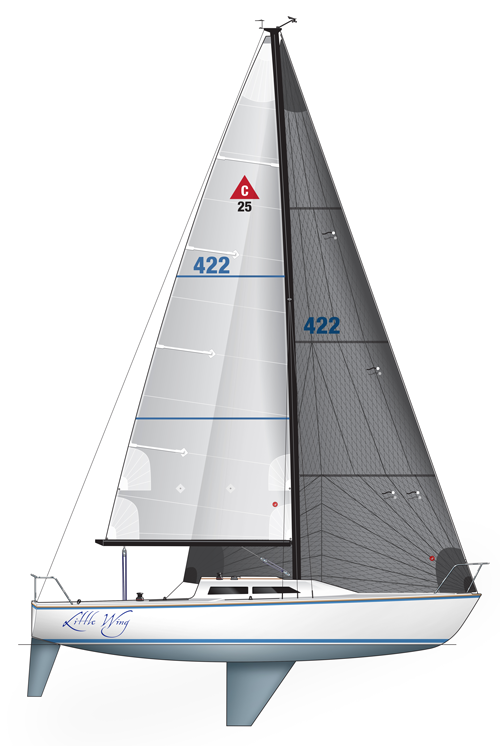 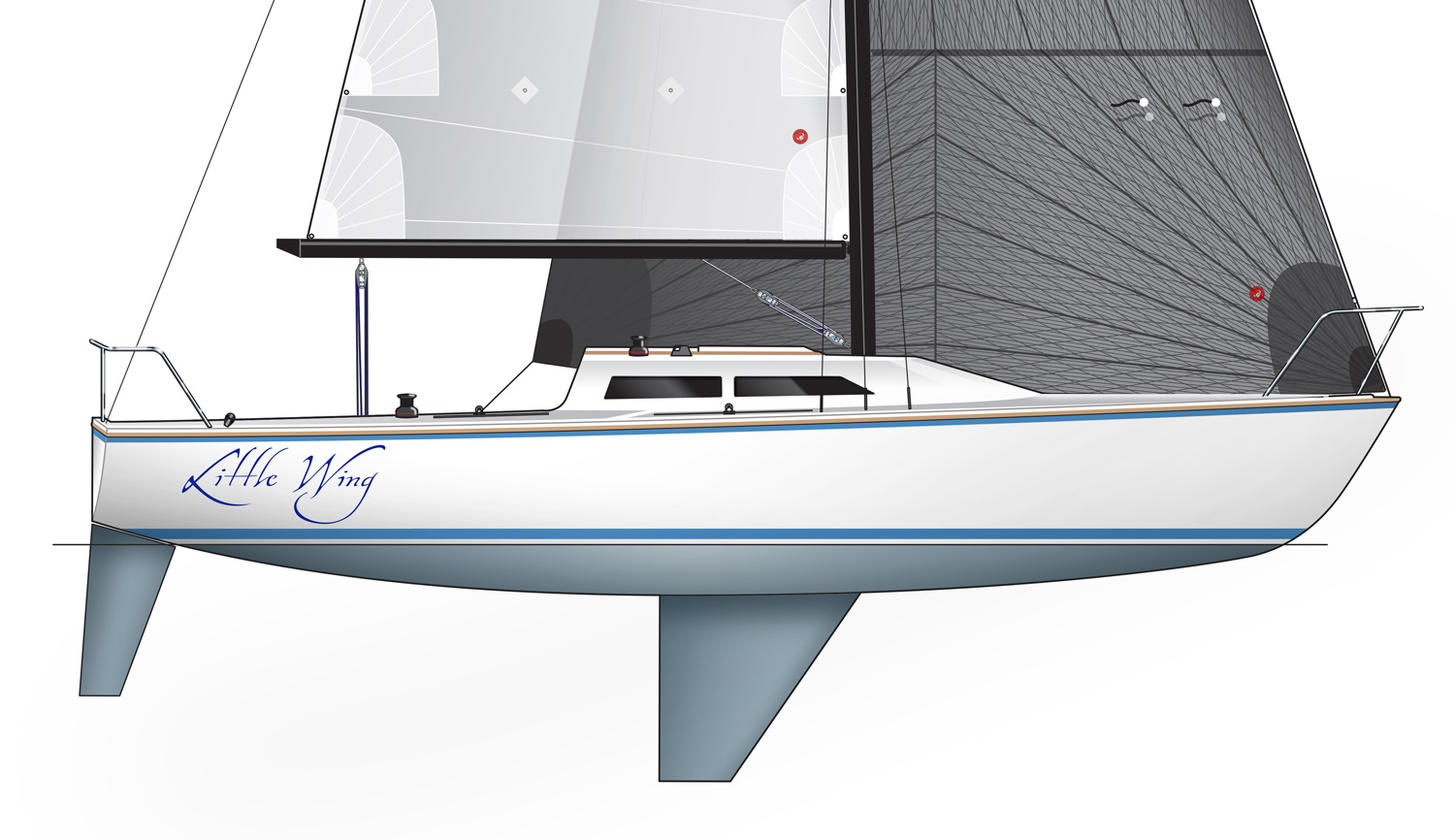 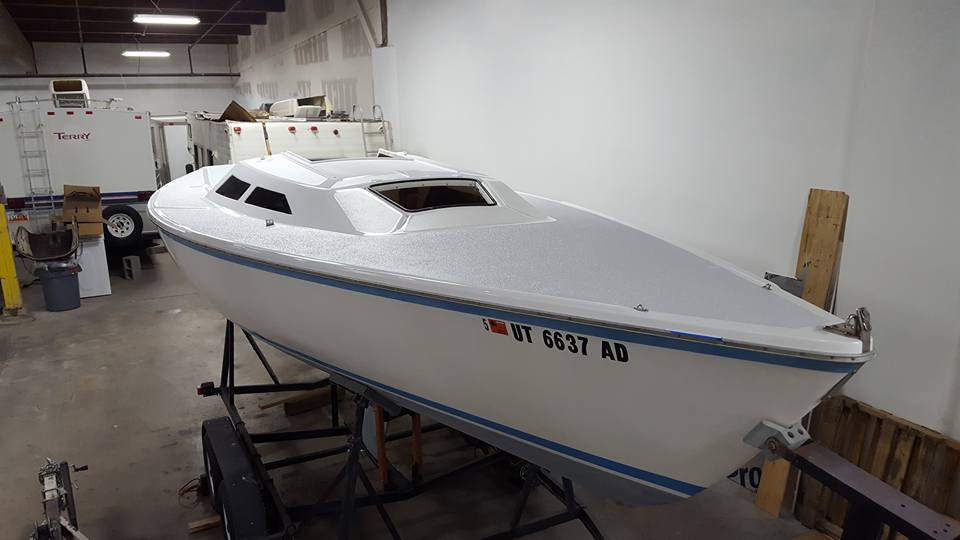 I love boats as much as any sailor but I am truly in love with my 1984 Capri 25 called Little Wing.  I picked her up in August 2016 after hearing about her over beers after a Thursday night race.  The boats at the Great Salt Lake in Utah had been sitting on the hard for 2 years waiting for lake levels to rise enough to fill the marina.  People were looking to get rid of their boats and Little Wing was a deal I couldn’t refuse.

She was in great shape considering her age and having sat on her trailer for 2 years uncovered.  The interior was excellent.  The bottom had layers of old ablative bottom paint but all in all she was ready to sail.

I took ownership and she got stored that fall next to a friend’s house.  She was covered for the winter and in Spring 2017 I sanded for hours and hours to get the bottom race ready.  But while she was uncovered for the bottom work, she fell victim to seed pods from the cottonwood trees next to my buddy’s house.  What was a decent deck was now stained by seeds that embedded themselves in the boat.  They were impossible to remove.  I started thinking I should develop some kind of paint made with the seed pods.  Seems like it would last forever!

I didn’t let the stains bother me too much and our first season of racing on the boat was a success.  But the age of the deck paint became an issue.  The smooth parts of the deck were heavily oxidized and the factory molded non-skid was becoming non-existent.  By the end of the season I had decided to re-paint the deck.

Winters in Utah are plenty cold and snowy so an indoor space to work was needed.  I actually found a shop while surfing the local sailboat classifieds late one night.  A guy was selling a boat and the photos of the ad were taken in what looked to be a perfect spot for a deck job.  So I called the guy up, complimented his boat and asked if I could rent a space in his shop.  He agreed and I was one step closer to my project.

What I thought would be a simple spray and refresh of the non-skid actually turned into a full and complete deck restoration.  I also thought I could do this in 2 months.  That was also a mistake.  This project ended up being the biggest DIY project I’d ever done taking 5 months to complete.  But because we had the space and the time we decided to do the job right.

In November 2017 we started by removing all of the deck hardware, stanchions and pulpits.  The forehatch and cockpit lockers were also removed.  The teak was in bad shape so that came off as well.  From my count that was roughly 400 fasteners!  I was amazed at how taken apart Little Wing could be.  This part of the job was actually pretty quick.  Soon after the sanding began.

When we sanded the bottom I realized sanding a boat is brutal.  Sanding the bottom was much more difficult but sanding the deck had its challenges.  I wanted to have a flat surface to paint the new non-skid so we sanded the factory molded non-skid off.  The parts of the deck without non-skid also got sanded pretty well since the paint was so oxidized.

Sanding took much longer than expected. Once the sanding was done we could focus on the rest of the project.  Here’s a list of those projects and what was done to complete them:

With all the intermediate projects done, it was finally time to start painting.  For simplicity I used one-part polyurethane Interlux Brightsides.  I purchased a cheap sprayer from Harbor Freight for the painting.  I actually went through 2 sprayers.  My advice here is to spend $100 on a quality sprayer.  It matters!  While I didn’t have huge issues, I did have to spend some time making sure the quality of the spray was what I wanted.

I sprayed a sort of half coat to make sure the paint would stick and that I didn’t miss any prep.  The test coat looked good so I went with 3 more coats.  I let each coat dry at least 24 hrs.

For the non-skid, I chose KiwiGrip.  KiwiGrip is a latex goop that gets it’s non-skid properties from a textured roller.   As with all paint, prep is key.  I followed the instructions for scuffing any shiny paint.  I wanted crisp lines from non-skid to shiny white, so I took my time with my tape job.  Once prep is done, I practices my KiwiGrip technique on a piece of ply wood.  While it’s simple, there is a technique to getting the texture you want and not having any bubbles form.  KiwiGrip has the consistency of yogurt and I glopped it on with a plastic spoon.  Then the roller is used rolling back and forth, spreading the goop and getting the texture right.  The more you roll it, the smoother it gets however, so that’s where some practice comes in handy.  The starboard side definitely looks better than the port side as I got better at rolling out the non-skid.

Once it was all dry, it was time to put the hardware back on.  I spent extra time making sure all my holes were clean and free of debris.  I used 3M 4200 in each hole.  Out of 400 holes, I only have 2 leaks!  We’ll tackle those next spring.  I put the new wood down on the cabin top and simplified the cabin top layout with new clutches and moving a halyard or 2.  I finished off the new deck with new lifelines and a new grey rubrail.

Once the deck was finished I went ahead and re-wired the interior and running lights and installed new LED lighting.

This was by far the biggest DYI project I have ever taken on.  Bigger than any landscape project.  Bigger than any car maintenance job.  But it was also the most rewarding by far.  Everything worked out great this summer.  KiwiGrip is awesome.  And having a clean, smooth cockpit to lounge in at the dock is amazing.  Little Wing gets many compliments at the marina and no one can believe the boat is more than 30 years old.  I think she has another 30 years left in her!