If you’re like most sailors, the engine on your sailboat often gets used for much more than just coming in and out of the harbor. When the wind is gone they get used for hours on end to take us to our favorite places!

Have you ever noticed a clunking or hammering sound while motoring? If so it’s possible your prop shaft strut bearing might be worn out. Note that sometimes these bearings are referred to as a Cutless bearing, which is correct. The tradename “Cutless” is a registered trademark owned by Duramax Marine, however.

So what does a prop shaft strut bearing do exactly? The prop shaft passes through the strut but is supported by a bearing. It’s basically a brass sleeve with a hard rubber insert that’s ribbed. The ribs keep the prop shaft inline and also allow water to flow through, which lubricates the bearing. As time goes by the prop shaft can wear the rubber ribs down, which means the prop shaft will no longer fit tight in the bearing and may create a clunking noise.

You can easily check the bearing when the boat is out of the water by pushing on the shaft side to side or up and down. If it moves at all, you need a new bearing.

Removing the bearing shouldn’t have to be so much work, so we came up with an easier way that uses a jig to push the bearing out with the prop shaft in place. . The only additional thing that needs to be removed is the prop itself. The idea is to make a sleeve out of 1″ pipe that fits over the prop shaft to push the bearing out. I used a 4” section of pipe that is small enough to slide through the strut. In order to get it on the prop shaft, I had to split the pipe. I split it by using a hacksaw, but finding a friend with a power hacksaw would be worth your time.

In addition to the split pipe, we made our own jig, which is essentially a portable puller/pusher that is made up of bars, rod, bolts, nuts and washers from the hardware store. To make the jig start by cutting four 7-1/2” lengths from 1/4 x 1-1/2” steel bar stock. Layout and drill the 7/16” holes as dimensioned on the Pressure Bar drawing. Cut two 18” lengths of 1/2” threaded rod, and then assemble as shown in the video.

Once the new bearing is in place you can lock it in place with the set screws. Reinstall the prop and you are ready for some happy motoring!

Ever heard a clunking sound while motoring? It could be your prop shaft bearing. Watch the video below to see how to check it and easily replace it.

Inside this Video You’ll Learn More About… 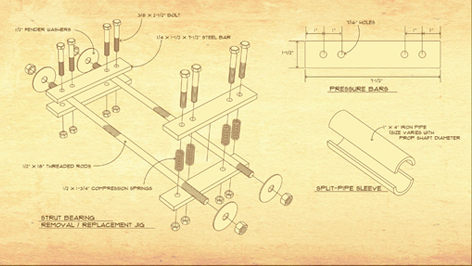 This removal jig made it super easy to replace the strut bearing on the our boat. All of the supplies are available at your local home center or hardware store.